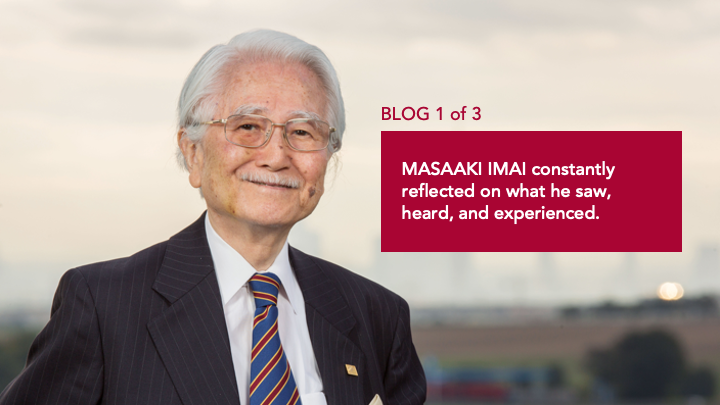 The historical development of Masaaki Imai’s insights into organizational behavior

Masaaki Imai has been the pioneer of the renowned KAIZEN™ approach as developed and practiced at Toyota Motor Corporation for over a 100 years, including numerous Japanese organizations. For almost four decades he has been promoting the KAIZEN™ approach as a strategy to achieve organizational greatness instead of making disconnected, disjointed, and unsustainable short-term improvements. He has consequently been recognized globally for the major influence and general acceptance of his groundbreaking work.

On September 1, 2020, Masaaki Imai celebrated his 90th birthday virtually with some of the global leadership team he worked with since he founded Kaizen Institute in 1985. The following day he was interviewed to reminisce on this milestone but also to gain some insights into his (soon to be published) third book. The following are some highlights from this interview with a true sensei with two blogs to follow.

His early years in the US

As a young man in his late twenties, he was selected from thousands of applicants in Japan to represent Japan Productivity Centre in Washington D.C. in the US during the late 1950s. There he hosted senior executives from his home country in their quest to learn from American businesses during their economic rebuild after WWII. Subsequently, Masaaki Imai met numerous influential Japanese business leaders and spent abundant time with them as a translator, accompanying them to endless businesses during the almost five years he spent in the US. He obviously met leading US business leaders during these events.

This very close association with senior Japanese business leaders were taken to a next level when he returned to Japan by being invited to visit numerous of these prominent business contacts and their companies. Consequently, he observed many business practices and developed a birds-eye view and a unique perspective of Japanese organizational transformations and the evolution of their recovering national economy.

Experiencing the evolution of the Japanese economy

On his return to Japan he saw the gaping need to recruit senior executives to support the ongoing advancement of the Japanese economy and established an executive recruitment company. This business opened further access to all sorts of organizations in Japan, deepening his understanding and insights on leadership, management, and operations. This natural development (as he phrase it) of his life story, positioned Imai to truly understand both Japanese business and US companies and their radically different management approaches. He therefore had a unique insight into the key to Japan’s competitive success during and after the oil crisis in 1973.

Masaaki Imai’s insights were gained from continuously gathering data and information on both the Japanese and US management approaches. The constant reflection on what he has seen, heard, and experienced since his twenties, enabled him to release his first best-selling book KAIZEN™: The Key to Japan’s Competitive Success (McGraw Hill 1986). This publication led to numerous invitations to lecture at prestigious institutions like Harvard Business School where he developed a personal relationship with many of the academics. It was also during this period that he established Kaizen Institute operations in the US, and later in Europe, elaborating on his previous experience of the Western organizational psyche and culture, and how it differs from the Japanese approach.

The KAIZEN™ seminars Imai delivered became instrumental in opening the eyes of many business leaders to the potential of KAIZEN™. This included the Danaher Corporation (who has become one of the most successful businesses through its application of KAIZEN™). Imai has been playing a pivotal role in the study and betterment of organizational behavior since his early career.

From a historical perspective, Masaaki Imai can truly be regarded as the father of KAIZEN™ and a pioneer in organizational excellence. The narrative of Masaaki Imai captures the authenticity of the KAIZEN™ approach (one of Kaizen Institute’s four brand promises), uniquely presented to the world since the 1980s and still changing organizations for the better across the globe.

The first insight from interviewing Masaaki Imai is his dedication to ongoing learning. Gathering data and information on organizational behavior through many decades, without having the writing of a book in mind, shows his personal dedication to self-education. One can attend a university and still not be educated. One can be trained and still be reckless and irresponsible with the truth (of the reality of our work and our world), or don’t care about the truth in an organization. A position, a title, does not imply being educated because it takes respectful curiosity, a willingness and humbleness to learn, to improve the workplace and life. The secret ingredient of this approach is a devotion to life-long learning as personified by Masaaki Imai.

We need to seek the truth in our organizations; applying KAIZEN™ is an effective and efficient methodology to see and understand this daily reality. In a post-modern world, truth has been discarded to our detriment; KAIZEN™ helps us to make problems visible (seeing the truth), seeking and implementing solutions with everyone, everywhere, every day.

A second lesson that goes beyond lecturing on process methods and tools, is the respectful relationships Masaaki Imai developed with the business fraternity since his twenties. His enthusiasm opened numerous doors and initiated enduring relationships for him in Japan, the US, and across the globe, even until today. Organizational behavior and culture can be changed for the better by applying Imai’s proven KAIZEN™ approach. Work is more than learning to fix process problems in a disconnected way; it is also about being educated and changed to become a respectful, effective leader of the people in the pursuit of excellence.

Topics in the next two blogs:

older
Back to overview
newer

How the war in Ukraine is further disrupting global supply chains

The big challenges for supply chains in 2022

We know what we can do with KAIZEN™

KAIZEN™ – the way to develop, manage and lead the company

Learning by doing - and realizing that something big is happening

How to build empowered teams in a structured approach

The KAIZEN™ Way to re-shaping the economy (3): Trust and transparency

The KAIZEN™ Way to re-shaping the economy (2): A culture of common sense

The KAIZEN™ Way to re-shaping the economy (1): Improving leadership

More than 35 years of KAIZEN™, but a long way to a KAIZEN™ culture

Redefining What It Means to Be a Quality Leader

Portuguese wines are increasingly appreciated, but the formula for success is not simple

The Impact of Strategic Planning

Generation of Wealth in Organisations

The 35-year Journey of Kaizen Institute

Components of sustained greatness and growth

The historical development of Masaaki Imai’s insights into organizational behavior

Take advantage of the crisis to develop people and processes

Ostrich or Albatross? Fear or Flight? What are our options post COVID-19?

How KAIZEN™ can assist Hospitals

The Path to Patient Safety in Japan (or Elsewhere): Reporting Problems, Solving Problems

The Key to Leadership Is Consistency

How to Use Training Within Industry to Build a Lean, Mean Manufacturing Workforce

The Best Kind of KAIZEN™

Integrating Industry 4.0 and a KAIZEN™ Culture

What a Customer Should Never Hear

Where Efficiency and Lean Equal Value-Add

Get all the latest news about Kaizen Institute.
Subscribe now.